June 2018
Katrina Barter stepped down as Chairman of The Grove Trust as she is moving with her family to Australia. She remains a trustee and will keep in close contact with us depite being so far away.
Julia Coupland and Dani Duclos (Hains) will share the role of chair going forward.

​
September 2015
This month The Grove Trust celebrated its 5th birthday in the Mayor's Parlour along many of our members and charities we have supported. 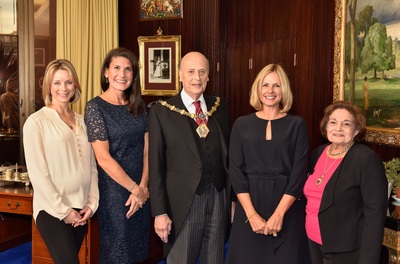 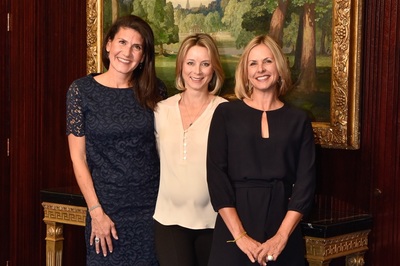 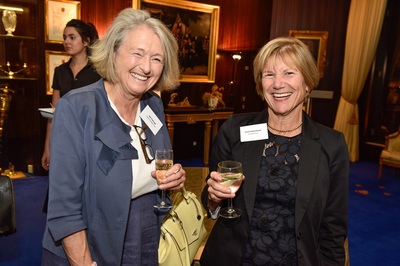 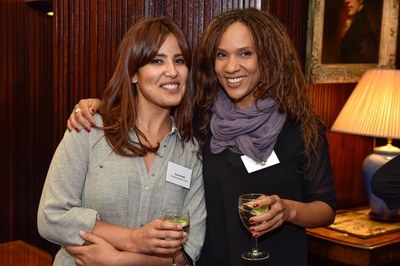 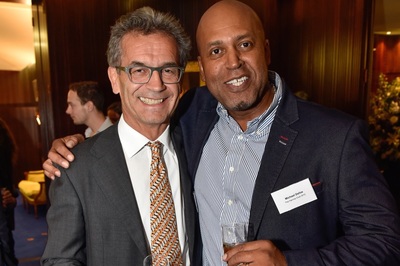 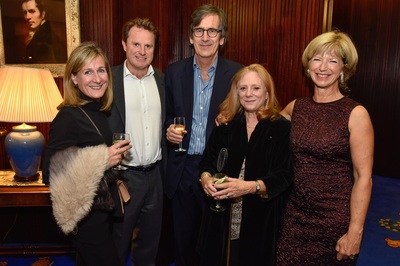 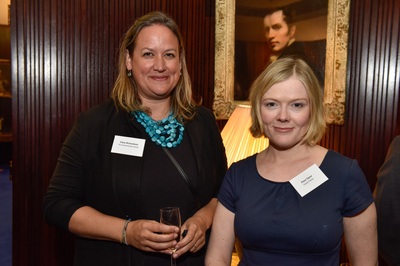 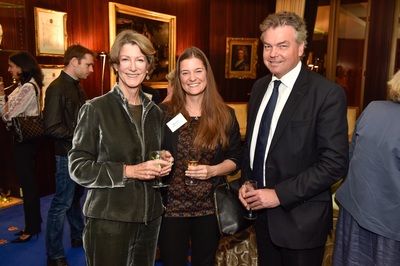 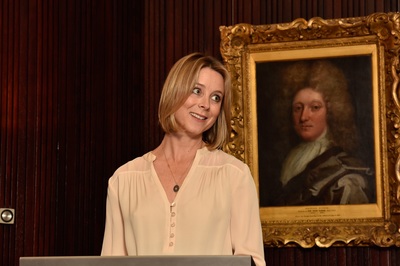 
Thank you all for joining us this evening to help celebrate the 5th birthday of The Grove Trust. I would particularly like to thank the Mayor and Mayoress of Kensington & Chelsea, Councillor and Mrs Robert Freeman, for generously hosting us in this auspicious venue. As well as Jeremy and Britta Lloyd and David Fitzsimons for kindly donating the delicious food and beverages.

Secondly I would like to thank all of our incredibly generous members, as well as the many individual donors who have contributed to The Grove Trust. I would like to make a special mention of seven members here tonight who shared our vision and backed The Trust since its very first year: Lauren Clancy, Sarah Chappatte, Liz Dingemans, Paulina Wilhelmsen, Angus Coupland, David Fitzsimons and Chris Barter.

And thirdly, I would like to thank the wonderful charities we support. There are too many to name this evening, however, they are all in this room. I hope that you will take a moment to seek them out and chat about the inspiring work a small number of dedicated people, on incredibly tight budgets, does to improve the lives of thousands of people in our community.

Most of you know the history of The Grove Trust, but for those who are newcomers please allow me to briefly set the scene. In early 2010 I approached two good friends and neighbours, Dani Hains and Julia Coupland, and discussed the idea to raise money as a growing collective and support exclusively local charities on an evolving basis. Like myself, Dani and Julia are passionate about Notting Hill and truly appreciate what a fantastic place it is to live. ……..the unique, villagey feel it offers in the centre of a very big city, the extraordinary culture diversity, the parks and gardens, the unrivalled speciality shops and boutiques, fabulous sporting facilities and schools, just to name a few of its many benefits.

We were also keenly aware of the gaping discrepancy between rich and poor on our doorstep. However, we weren’t aware of how large this was until we dug a little deeper. I would like to mention a few statistics that I sourced from the K&C Foundation; a fabulous charity we support whose new Director, Susan Dolton and long standing Chair, Tim Coleridge are with us tonight.


I think you will agree that these statistics are surprising and need to be improved.

Whilst the work and beneficiaries of The Grove Trust are not limited to Kensington and Chelsea, the bulk of the charities we support are based in North Kensington and most of them are unknown to local residents.

Each year, we choose an area of need to focus on. Following a rational, in depth due diligence process we narrow a long list down to 3 or 4 outstanding charities servicing that particular need. These charities are invited to present to our members and collectively we decide how to allocate our pool of funds.  No easy task. Due to the high calibre of charities, each has received a grant over a two or three year period.

In the past 5 years we have looked at education, older people, vulnerable adults, impoverished children and unemployment. This year we are focusing on wider learning opportunities for children.

Aside from the financial benefit we provide to the charities, we have developed a more meaningful relationship with many of them and also helped in non-financial ways such as collecting books for libraries, introducing qualified volunteers and encouraging joint ventures.  By keeping in regular contact, we do our best to keep abreast of changes, progress and difficulties.

With funding growing increasingly scarce in this age of austerity, we have managed to step in and rescue charities in times of financial stress. We have also been lucky enough to build a separate fund thanks to individual donors and used this money to support programmes such as Avondale Primary School’s breakfast club, Al-Hasaniya’s luncheon club for older women and Summer holiday programs for children organised by the K&C Foundation.

Whilst there are a large number of charities in our neighbourhood given the economic disparities, I would like to point out that the local council is incredibly active and supportive.  In addition, the local charitable sector is a tight knit community. It is impressive to witness many of the charities working together when appropriate, hence reducing overlap and increasing efficiency. This is something to be proud of.

To date we have awarded multiple grants to 20 local charities and have raised just over £1 million. We are hugely thankful to all of our supporters for making what began as a small dream, grow into an impactful reality.

February 2014
The Grove Trust held its AGM on February 4th. The members voted and decided to focus on 'vulnerable adults' for 2014. This is an age group (25-50 years) that we have not looked at before and will cover many people with wide ranging needs who do not fall into the most popular demographics targeted by many charities.

January 2013
The Grove Trust visits New Scotland Yard to view a film made for the St Giles Trust featuring Metropolitan Police Commissioner, Sir Bernard Hogan Howe, Former President of the Supreme Court, Lord Phillips Worth of Matravers and ex- offenders who now work on the frontline helping others to change their lives through the SOS project. 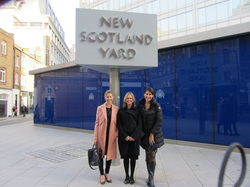 December 2013
The Grove Trust is delighted to announce that our grants for 2013 have been awarded to four fantastic local charities:  ClementJames Centre, Dalgarno Neighbourhood Trust, Family Friends and the Venture Centre.

Since its inception, the ClementJames Centre has run a hugely successful education programme called IntoUniversity. Based on this great track record, ClementJames is currently seeking funds to establish a literacy and numeracy programme as many of their children are struggling in these areas at school.  The Grove Trust funding will go towards establishing this incredibly worthwhile programme. www.clementjames.org.

The Dalgarno Neighbourhood Trust is a community centre based in the Dalgarno estate at the North end of St Marks Road. Dalgarno runs various programmes for children including a homework club, cooking club, math club and other art related projects. They would like to expand all of their current programmes which will require funding to pay for extra staff.  The Grove Trust grant will go towards additional staff for these incredibly valuable programmes.  www.dalgarnotrust.org.uk.

Family Friends is a befriending and mentoring service for children aged 0-16 years and for the parents of disadvantaged families. This charity provides early intervention services through a network of trained volunteers. Family Friends was awarded the Queen's Award for Voluntary Service in 2013 for charities supporting their community, yet despite this, they struggle every year to attract sufficient funds to pay their staff.  Grove Trust funding will go towards continuing the award-winning work of this amazing organisation.  www.familyfriends.uk.com

The Venture Centre is one of the oldest adventure playgrounds in the UK. It is based in the Wornington Green Estate just North of Golborne Road, Golborne Ward is the second poorest ward in the UK. The playground attracts up to 150 children at any given time and is busiest during the warmer months after school and on Saturdays. They also run a cooking club, arts & crafts, book club, and a summer camp in Kent.  The Grove Trust grant will fund an additional staff member to extend their healthy living and eating programme and to offer an additional week to their summer camp programme. This will ensure more children in our neighbourhood can attend and experience life outside of the Golborne Ward.
October 2013
The Grove Trust finalist charities have been decided for 2013.  After completing a review of all 18 long-listed charities, and then performing due diligence on our short-list of seven organisations, we have identified our four finalists:  ClementJames Centre, Dalgarno Neighbourhood Trust, Family Friends and the Venture Centre.

September 2013
In the month of September the Grove Trust will consider a long-list of 18 charitable organisations that are working to help children living in poverty.  The list includes youth centres, legal support services, sporting clubs, arts trusts, study support, domestic abuse support and mentoring services.  To make it onto our short list, each charity will need to meet two criteria: 1) their youth programmes must primarily support children (aged 0-15 years), and 2) over 90% of the children that they work with must be living in poverty.  The charities consider children to be living in poverty if they receive free school meals.  Once we have reviewed all 18 charities, a short-list will be prepared for the next round of our grant giving process.

March 2013
In response to recent cuts in RBKC funding to Al-Hasaniya, the Grove Trust was able to step in and fund their Friday luncheon club for older women for a second year.  We funded this through the Grove Trust Special Projects Fund.   The luncheon club is well attended and warmly received by many people in the Al-Hasaniya community, affording them not only a nourishing meal, but a chance to socialise, and to share information and knowledge about health topics, changes to benefits, and so much more.
February 2013
At our annual meeting in January, the Grove Trust members decided to focus on children living in poverty for 2013.  The Royal Borough of Kensington & Chelsea is one of the wealthiest areas in the country. It boasts the highest property prices in the UK, however, in amongst this wealth there are deep pockets of poverty and deprivation.  This is highly concentrated in our immediate area (i.e. The Grove Trust catchment area), and we are keen to do what we can to help the impoverished children in our neighbourhood.  Disadvantaged children suffer academically, have greater ill health and are more likely to be involved in crime, both as a victim and a perpetrator.  For this and so many other reasons, The Grove Trust is proud to be focusing on this important issue for the coming year.